The Future of Climate Strikes

During the week of September 20, 2019 more than seven million people around the world participated in what was dubbed a global climate strike. They held more than six thousand events in 185 countries.[1] Weekly school strikes initiated by students had burgeoned within a few months into a global movement. The young people who initiated the movement vowed to continue their weekly protests and to build up to an even more disruptive week of global climate strike during the week of Earth Day 2020.

The logic underlying the climate strike movement was summed up by its founder Greta Thunburg: “Some say that we should not engage in activism, instead we should leave everything to our politicians and just vote for change instead,” she said. “But what do we do when there is no political will? What do we do when the politics needed are nowhere in sight?”[2] Her answer was a strike that would disrupt “business as usual” around the world. 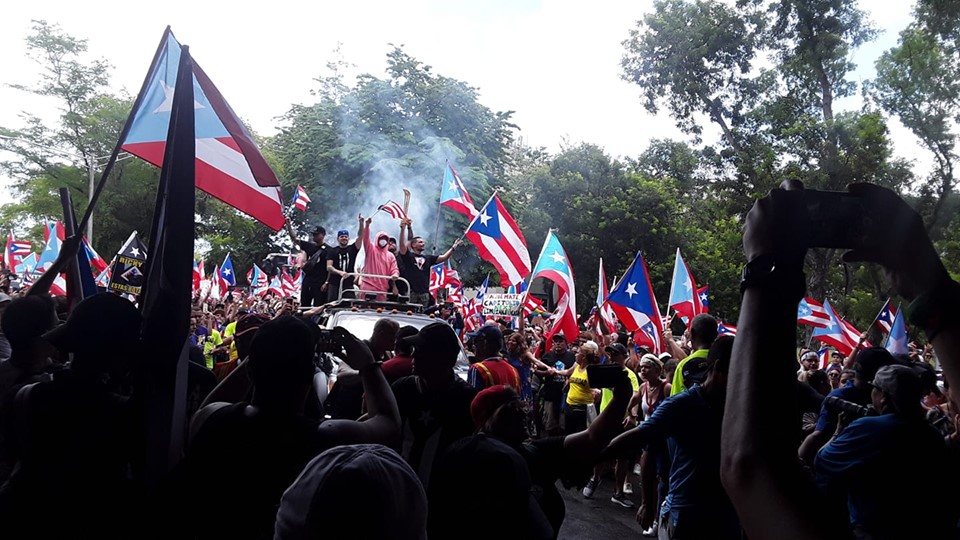 Protesters on July 25, 2019, celebrate in Puerto Rico following the resignation of Governor Ricardo Rosselló, marching from Milla de Oro in Hato Rey to the Hiram Bithorn Stadium in San Juan. By Daryana Rivera

Meanwhile, mass strikes and nonviolent mass uprisings around the world have been demonstrating how ordinary people can make history by intervening in business as usual. Just in the past year, Puerto Ricans held a general strike and a million of them – about one in three Puerto Ricans – occupied the capitol San Juan, forcing the government’s highest official to resign.[3] In Sudan, a two-day general strike and street protests led to the ouster of the president. In Brazil, 45 million workers took part in a general strike to protect worker rights.[4] Massive confrontations in Hong Kong, featuring a general strike, continued month after month. India saw the largest general strike in the history of the world, with 150-200 million participants.[5] In Chile demonstrations against a subway fare hike eventually brought four million people to the streets to reject the country’s 20-year experiment with extreme neoliberalism and call for a new, more democratic constitution. Millions participated in general strikes and large street protests in Algeria, Egypt, Iran, Iraq, Lebanon, Ecuador, Indonesia, Italy, France, UK, Catalonia, and the Czech Republic.[6]

Could some similar kind of mass strike and popular nonviolent uprising create the political will for climate protection and break the power of the forces that are promoting climate destruction? As the world hurtles into climate catastrophe, such a possibility has begun to take hold on the imagination of those around the world who would not sit by and see the basis for human life on earth destroyed. Groups like the student strike organizations, the Sunrise Movement, and Extinction Rebellion have called for strikes and mass direct action to implement climate protection and a Green New Deal. Sunrise Organizing Director Dyanna Jaye recently wrote,

The only way to get the political establishment to make the Green New Deal a priority in 2021 and beyond is by disrupting business as usual. Young people around the world have already been doing this with the #ClimateStrike movement. This year, we’re going to turn up the heat, starting with massive strikes on Earth Day to make sure that the Green New Deal is THE story for 2020 as we head into the elections.

After we push as many Green New Deal champions into Congress as we can, we will shock the political system again with the biggest wave of strikes, marches and walkouts this country has seen in generations. All this year, we’ve got to build our movement so we can flex when the window of opportunity opens up in 2021 to start making the Green New Deal law.[7]

But is that a real possibility? Can there be real strikes that shut down workplaces and industries or just protests that make a statement but lack the power to force power holders to do things they so far have resisted doing? While millions of students have demonstrated that they can engage in school strikes, there appear to be enormous obstacles to effective participation by workers in strikes to protect the climate. While millions of adults joined the September 2019 climate strikes, there is only one case I have been able to discover where workers actually struck. In the United States and many other countries unions are prohibited by law and by their contracts from participating in such strikes. Workers in the fossil fuel-related industries often believe they have a direct and immediate interest in opposing climate protection measures. Workers have often been militant opponents of efforts to close coal-fired power plants and block the construction of fossil fuel pipelines. Nor is it self-evident how a strike or even a popular upheaval can bring about the legislation, economic transformation, and cultural change necessary to halt greenhouse gas emissions.

In this series of commentaries on the Future of Climate Strikes we will explore questions like where does the power of non-institutional, non-electoral “people power” come from? How can the climate movement use this power? How can it overcome the obstacles to workers and unions striking for the climate?  Can extra-institution people power be combined with more traditional institutional political efforts like the Green New Deal?

The first commentaries in The Future of Climate Strikes will tell the story of the climate strikes so far. The next set present a range of historical strikes, mass actions, and other upheavals that may shed light on how people power might be used by the climate movement. Later posts will present themes and reflections on how such actions might form part of the strategy for climate protection and the Green New Deal.

The intent of this series is not to lay out predictions, scenarios, rules, or the one correct strategy. Both the climate crisis and the movement addressing it are too fast-moving and dynamic for that: A year ago who would have predicted the Green New Deal or the global strikes for climate? Rather, these posts present a panoply of historical experiences, perspectives, and insights that climate protectors can use to develop strategy and tactics under the pressure of real life conditions. I hope you will find them useful, but even more I hope you will identify their weaknesses and help revise them to make them better.

Get “Strike!” in Your InboxGet the 50th Anniversary Edition
DONATE ONLINE